It was a lazy Sunday afternoon. I had just savoured my finger-licking tasty Biriyani and sat down to do some crosswords on American and British variants. As I was cudgelling my brains over the spellings, the lingering taste of the Biriyani stirred in my mind a strange thought. Can English be fondly called the Biriyani of all languages?

Biriyani, “everyone’s favourite food” originated from Persia and was brought to India by the Mughals. Over the years, Biriyani has evolved into many variants namely Lucknawi, Hyderabadi, Ambur, Thalasserry and so on, each with a distinct local flavour. English, too, as a language originated in Britain. However, the imperialistic ambitions of the British Empire paved way for the language to travel to different continents leading to the birth of numerous variants of the English language.

Most of us are familiar with at least two variants of the English language: North American and British. You would be surprised to know there are countless variants. These variations can differ in accents, spellings and even diction. A simple scroll in your ‘setting the language preference’ in Microsoft Word settings will let you know the numerous variants of English extant today.

Interestingly, four major variants of the English language tower above the rest as the most widely used variants: American, British, Australian and Canadian English.

English, or what we refer to as British English today, originated from Anglo-Frisian dialects brought to Britain by Germanic settlers.  Over the years, spanning centuries, England underwent a series of invasions from the Romans, Vikings and Normans, each influencing the English language in their unique way. The dawn of the Renaissance was heralded across Europe with the invention of the printing press. The introduction of the printing press enabled the evolution of a common dialect and uniformity in English spelling.

Across the pond, the use of English in the United States was the consequence of the British colonization of the Americas. The steady influx of English-speaking immigrants from different parts of Britain during the 17th century allowed the coexistence of various regional English dialects in the American colonies. This triggered the amalgamation and the subsequent homogenisation of the numerous dialects and the eventual emergence of American English. American English, as we know of today, was further influenced by other diverse languages, primarily European.

These successive influences and incessant mixing slowly yet steadily led to the origination of a distinct American dialect. The country of the Star-spangled Banner is immensely indebted to Noah Webster who took this arduous work of standardizing American English. Webster published in 1783 Webster’s speller and later his American Dictionary of the English Language in 1828. Both these books tremendously facilitated the homogenisation of the American variant.

In the Great White North, the term “Canadian English” was first coined rather condescendingly by Reverend A. Constable Geikie, in 1857, while referring to the crude English dialect spoken in Canada in contrast to the rather puritanical English spoken by the Britishers. Like the rest, Canadian English, too,  is a product of waves of immigration and settlement over a period of more than two centuries. The first immigrants were the loyalists who fled the United States at the end of the American Revolution. The second wave of immigrants were mostly from Britain and Ireland who were encouraged to settle in American to counter the American influx. In addition to these, Canadian English continued to be influenced by the local aboriginal languages and French, the other dominant language in Canada.

However, it was not until Katherine Barber burst into the lexical scene that a comprehensive Canadian dictionary was published. Fondly called the ‘word lady’ Katherine Barber raised awareness over the distinctiveness of Canadian English. Today, The Oxford Canadian Dictionary edited by Katherine Barber is regarded as the authoritative reference work to decode contemporary Canadian words and meanings.

Down under, the earliest Australian English was spoken by the first generation of native-born colonists. These native-born children were exposed to a wide range of motley dialects from the various counties of the British Isles. Here again, the blending of the various dialects ensued koineization which resulted in the birth of a new variety of English. The Gold Rushes of the 1850s brought immigrants and linguistic influences from many other parts of the world. The presence of American military personnel during World War II and the popularity of American movies also influenced the Australian dialect.

Well, as one can see, the evolution of a language and its variants is no different from Darwinian biological evolution. Time churns the distinction within a language in accents to dialects and someday altogether to a new language. The taste of the mouth-watering Biriyani lingered still. So did my curiosity. I now inquired why with a population of over a billion people Indian English did not emerge as a more dominant variant. The answer lies in the demography of these nations. The natives of the above nation are predominantly native speakers of English, mostly immigrants from the British Isles. However, although English is an associate official language, it is not our native language. Unlike the above nations who strive to define their identity with their dialect of the English language, we do not define our identity with the English language. Our identity, rightly so, lies in our mother tongues. As professional editors or even as laypeople, an awareness and reasonable acquaintance with these variants is encouraged. And may I add, I am amazed at the timelessness and the beauty of these two. My lips mumble spontaneously. ‘Age cannot wither her, nor custom stale /Her infinite variety’. Yes! This is true! For both…. Biriyani and English! 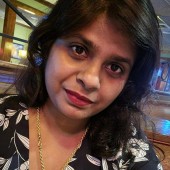 A Tale of Two Countries: British Vs American English